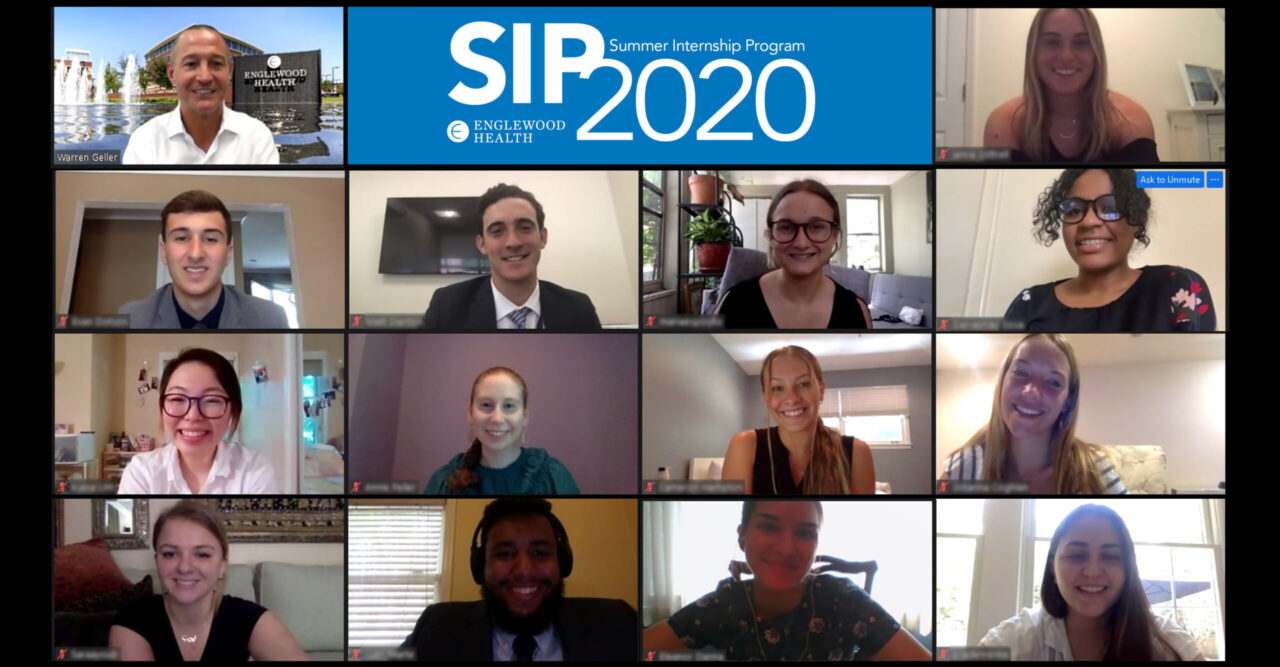 This past summer, COVID-19 threatened to cancel internships across the globe. For students in their senior year as undergraduates or in one-year graduate programs, this meant missing out entirely on student-exclusive internships. This is no small loss, as internships play a vital role in shepherding students from the academic world into meaningful and enjoyable careers in the professional world.

They solve the, “can’t get a job without experience, can’t get experience without a job,” quandary. And, perhaps most importantly, internships allow students to gain clarity about their interests outside the classroom.

As Englewood Health has been fighting COVID-19 on the frontlines this year, whether or not its summer internship program should be held at all was a serious consideration.

Braden Renke, a junior at Franklin & Marhsall College in Lancaster, PA, was accepted into the program in January. Renke recalls being “bummed” when she received an email from Englewood at the beginning of the pandemic advising her to apply to other programs just to be safe.

“Then in April or May,” Renke said, “I got an email saying, ‘If you’re still interested, we’re going to hold the internship. For the first time ever, it’s going to be online’ And I said ‘Absolutely!’”

Renke is a psychology major on the pre-med track, but this summer she interned with Englewood’s communications team.

“I liked how there were a lot of different areas I could intern in—that it was versatile and I didn’t have to make up my mind right away,” Renke said.

Renke has a diverse range of interests—she was previously a government major and interned for Senator Cory Booker last summer. Recently, she’s become more passionate about mental health and psychology.

Renke was joined by fellow intern Kiana Lim, a senior nursing student at Villanova University in Pennsylvania. The pair became fast friends and ended up working on their end-of-summer project together.

“Braden mentioned she was interested in mental health and I’d learned about mental health issues last semester,” Lim said, “so we decided to do some more research on the mental health-poverty trap.”

Along with several other interns, Renke and Lim put together a presentation with actionable suggestions for how Englewood Health could perform community outreach: distributing pamphlets, sending representatives to places of worship, and running wellness programs beyond the hospital campus.

“We had the hospital leadership hop on a Zoom call with us so we could get their feedback and answer any questions they had, which was really cool,” Lim said.

This summer, Lim interned with physicians working in the ICU. She and three other interns helped collect and organize data on COVID-19 during the months when there was still vast confusion about the disease.

“We were collecting data on patients’ symptoms, comorbidities, and treatment plans and plugging that information into the Society of Critical Care Medicine [SCCM]. They used that data to create a website compiling information from many different hospitals so doctors could figure out who was at high risk for COVID and what treatments were working,” Lim said.

Thanks to Lim and her colleagues’ work this summer, Englewood Health is now the top hospital for enrolled patient data on the SCCM site.

“Once a week, each of us was able to attend rounds on the ICU floor, get some clinical experience, and talk to the residents and doctors about their experiences during the pandemic,” Lim said.

Lim explained that, despite what some may expect, getting a close-up look at an ICU during the pandemic did not deter her from her dream of being a nurse. Instead, Lim found it inspiring and was left with an even stronger resolve to pursue medicine.

“I’m still in touch with one of the physicians I worked with over the summer and I’m helping her out with further research on a volunteer basis,” Lim said. “I think a benefit of the Englewood Health internship program is that it’s not just for the summer. You make professional connections that extend far beyond a traditional internship.”