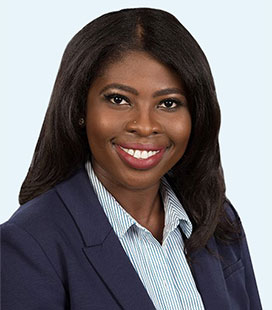 Rosemary Ojo, MD is board certified in otolaryngology and performs cochlear implant surgery, a highly specialized procedure that requires additional years of training

Rosemary Ojo, MD is board certified in otolaryngology and performs cochlear implant surgery, a highly specialized procedure that requires additional years of training

Eight-month-old Jonathan is perched on his mother’s lap in a doctor’s office. Wearing a blue onesie, he sucks on a pacifier as his eyes cruise the room. Jonathan’s father takes the video that now boasts more than nine million views on YouTube. A doctor can be heard off–screen, narrating the process as he plays with the levels of Jonathan’s new cochlear implant. Prompted by the doctor, Jonathan’s mother begins speaking to him.

“Can you hear me Jonathan?” she coos.

Jonathan looks up at his mother, eyes wide, and drops the pacifier from his mouth. A toothless grin stretches across his face as he stares up at his mother and hears her voice for the first time.

Videos such as this one have gone viral for years. Jonathan himself is now eight years old and likely no longer remembers a time when he couldn’t hear. Cochlear implants, too, have come a long way since then. Rosemary Ojo, MD, a highly specialized ear surgeon, who performs cochlear implants has a passion to treat conditions, including unusual ones, that affect hearing and the ear in patients from eight months to 90 years old.

Who is a candidate for a cochlear implant?

Dr. Ojo: People for whom a cochlear implant is appropriate have such severe hearing loss that it affects the inner ear structure called the cochlea, which contains the organ of Corti. Regular hearing aids are ineffective in these cases. I tell my patients that a cochlear implant is like a computer that we put in the cochlear organ. The implant bypasses the damaged part of the ear, and via electrodes directly stimulates the hearing nerve that allows the brain to hear.

Is cochlear implant surgery a large part of your practice?

Dr. Ojo: Yes, there are very few physicians in our area who do the procedure—and I want people to know that they don’t have to cross the bridge to see a highly specialized ear surgeon.

What are the most common conditions you treat as an ENT?

Dr. Ojo: I see patients with a range of conditions, including age-related hearing loss, tinnitus (ringing in the ear), and large buildup of wax—usually the result of using cotton swabs, which over time push wax back into the ear. Patients also come to me with sinus complaints—usually infections, allergies, or post-nasal drip. Some patients have coughs that don’t go away after a cold, or acid reflux. Occasionally, I treat a patient who has cancer or a rare condition like Meniere’s disease or some other balance disorder.

This article tagged under