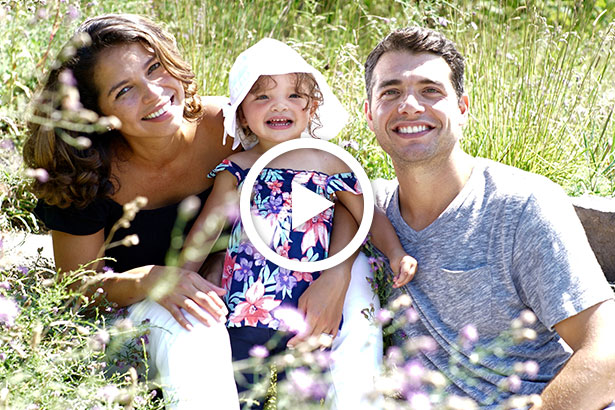 At fourteen weeks pregnant, Carolina found out she had cancer. She and her husband had to make some very difficult decisions.

Love at first sight is a particularly illusive kind of magic, the existence of which has been debated for centuries. But if you ask Matthew Antonelli, he’ll tell you he knows it to be real — because he it felt it the second he laid eyes on Carolina. He took one look at her curly head of hair and her bright smile and knew instantly that she was the one for him. It wasn’t long before he got down on one knee and a proposed atop a snowy mountain.

“It was a fairytale. I found the right girl, we got married and then it gets even better — she’s pregnant. But then it just goes downhill,” he says.

Fourteen weeks into her pregnancy, Antonelli was diagnosed with cervical cancer. The couple faced a nearly impossible decision.

“We knew we wanted a family. We wanted this baby more than anything. It was a tough situation to accept,” Antonelli says.

The choice of whether or not to terminate the pregnancy in the interest of her own health plagued the couple. They worried that following through with the pregnancy might endanger mother and baby, but terminating meant losing the possibility of a future with biological children.

“We had to perform a robotic pelvic lymphadenectomy during her second trimester to make sure the cancer hadn’t spread to the lymph nodes,” says Nimesh Nagarsheth, MD, director of gynecologic oncology and director of robotic surgery. “In all the world’s literature we have, this was only the second time this procedure was performed. After confirming that the cancer hadn’t spread, Carolina was able to choose to keep the pregnancy.”

After her surgery, Antonelli underwent chemotherapy. “We did our research; we visited other hospitals. But nothing gave us the warm feeling we got at Englewood Health. They gave us the positive atmosphere and reassurance we needed,” Mr. Antonelli says. He was at her side every day and, within a few months, a healthy baby girl was born.

“Angelina is the sweetest little girl. She’s such a miracle. I’m so grateful to Englewood Health. Because of them, I have a beautiful family and a lot to look forward to,” Antonelli says.

At fourteen weeks pregnant, Carolina found out she had cancer. She and her husband had to make some very difficult decisions.