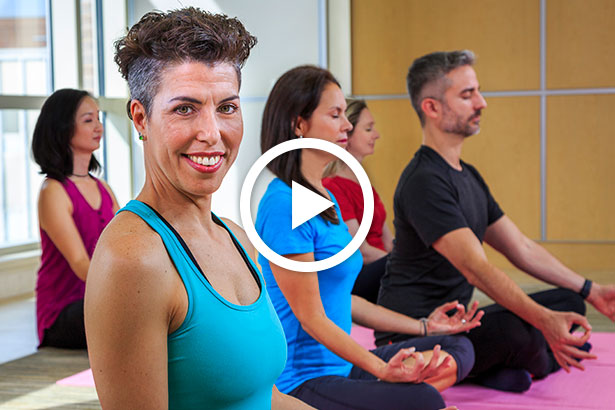 The five basic principles of yoga are exercise, breathing, relaxation, diet, and meditation. Being a yoga instructor herself, Mary Ann Fernandez was probably as mentally and physically resilient to face cancer as can be hoped. That didn’t make it any easier, however, when she was diagnosed with breast cancer in August of 2015.

“I remember when they said the words, ‘breast cancer,’ it all became fuzzy. I just collapsed because I didn’t anticipate this being a big deal — I even had my youngest son in the waiting room. I had to walk out and look at him,” Fernandez says.

A mother of three and the owner of a brand-new yoga studio, Fernandez was in great health at the time of her diagnosis, so the news came as that much more of a surprise to her and her family.

“Everything moved really quickly after that. I met my surgeon, Dr. [V. Merle] McIntosh, had more MRIs and testing done and began chemotherapy with my oncologist Dr. [Jill] Morrison,” Fernandez says.

She was initially hesitant to undergo treatment, wondering if there was a holistic alternative she could explore rather than surgery and chemotherapy. “Ultimately, I was like, ‘I have three kids. I have to do treatment. I have to stick around,’” she says.

Fernandez’ relentless optimism is what carried her through cancer treatment. At no point did she consider the possibility that she would not be OK in the end. She never lost her positive spirit or her sense of fun.

“I had a little project going on. I decided each day at chemotherapy was a theme, dressed up and took pictures. One day was The Matrix — I dressed up and had the blue cupcake and the red cupcake. Another was IV pole dancing — I came in a bikini and fur boots. If I had to be there for three hours, I was going to have fun,” Fernandez says.

“Mary Ann was always so upbeat and positive about getting through her treatments and beating this,” says Dr. McIntosh. “She was an inspiration and continues to be, as she works hard to motivate others to take care of themselves and to have an optimistic outlook.”

Today, Fernandez is cancer free and back to doing what she loves. She teaches yoga, not only in her studio, but also at the Graf Center for Integrative Medicine at Englewood Health. She donates her time to Graf Center; she felt it was important to give back to the place that helped her through this incredibly tough time.

“I was in the best hands I can imagine at Englewood Health. I’m so happy I choose to go there.”