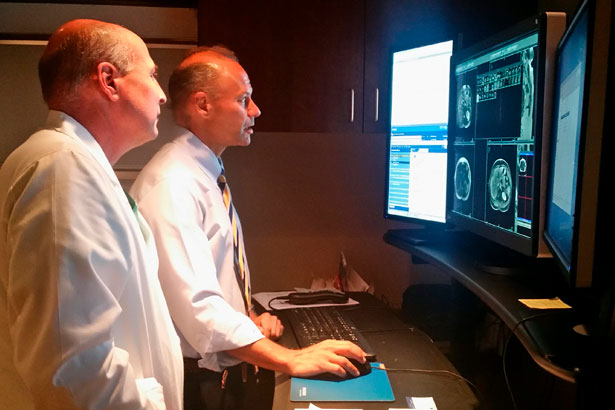 When the National Lung Screening Trial published its results, it got quite a bit of attention, and for good reason. It was the first prospective, randomized study to conclusively show that early detection of lung cancer saves lives.

“One of the controversies around cancer screening is that a test might find cancer, but it isn’t clear that there is any survival benefit associated with early detection,” said Mark Shapiro, MD, chief of the Department of Radiology at Englewood Hospital and Medical Center. “But in this study of more than 50,000 people randomized to either low-dose CT scan or standard chest x-ray, there was up to a 20% improved survival in those who underwent CT. That was huge.”

“At this point, we’ve screened a little more than 500 patients, out of whom we’ve diagnosed six with lung cancer,” said Lyall Gorenstein, MD, a thoracic surgeon at Englewood Hospital. He noted that this number is consistent with the 1% to 2% diagnosis rate described in the literature. “Four patients had early-stage disease and two were more advanced, but they were diagnosed much earlier than they would have been if we had waited for symptoms,” Dr. Gorenstein said.

Multidisciplinary Care Under One Roof

Since its establishment two years ago, The Lefcourt Family Cancer Treatment and Wellness Center provides rapid and seamless diagnosis and treatment once a CT scan detects potential cancer in a patient. The center incorporates a multidisciplinary approach to the internal workings of the cancer program, and a new building was constructed to house everyone involved in lung cancer patient care under one roof.

“This has always been the correct way to manage lung cancer, but now we have all the subspecialists in geographic proximity,” Dr. Gorenstein said. “Once someone is seen by the medical oncologist, they come up to my office to see the surgeon; then we take them downstairs to see the radiation therapist. So it all happens very quickly.”

Every patient is evaluated in real time by a pulmonologist, a thoracic surgeon, a medical oncologist and a radiation oncologist. “Often, there would be a lengthy delay from the time that patients are told they have a shadow on their lung to the point where they actually get treated. We make every effort to expedite that process to spare patients as much anxiety as possible,” Dr. Gorenstein said.

Every month, all subspecialists on the thoracic cancer team attend a multidisciplinary conference to discuss each patient recently diagnosed with lung cancer. Pathology and radiology are reviewed, and treatment options are discussed from a multidisciplinary perspective. “We go over everything from A to Z: the initial diagnosis, the treatment, the management. We have everyone’s opinion, and we come up with a formal treatment plan,” Dr. Shapiro said.

Most patients with lung cancer who undergo surgery will have a minimally invasive procedure, which allows them to recover faster and experience far less surgical site pain. For patients with early-stage lung cancer who are not candidates for surgery, Englewood Hospital uses the TrueBeam Radiotherapy System (Varian Medical Systems), which delivers high-dose stereotactic radiation therapy and is capable of treating patients in only five sessions. “Ours is one of the few centers in the region to have that state-of-the-art piece of equipment,” Dr. Gorenstein said.

Physicians at Englewood Hospital also are active on the investigative side and participate in a variety of multi-institutional prospective studies. “There are a lot of exciting new things happening in lung cancer, such as targeted therapies based on cancer genetics and immunotherapies,” Dr. Gorenstein said. “Because our center is affiliated with several national oncology groups, our patients have access to many clinical trials. In fact, we currently have active trials for patients in every stage of lung cancer.”