This article was published in September 2018, nearly two years prior to the death of Dr. Dardik in May 2000.

On most afternoons, Herbert Dardik, MD, can be found in his office at Englewood Hospital, hosting a discussion with a group of students—some days surgery residents, other days high school students.

A Founding Father of Vascular Surgery

“They recognized that I was doing academic work right here in the community at Englewood. Our work showed that research could be done in a community hospital, and these organizations began to ask, why can’t others do it? Today, many other community-based physicians are doing research.”

Englewood Health’s Vascular Research Lab allows surgery residents to conduct research and publish as part of their training. All of this has helped to make Englewood a leader in vascular surgery in the New York metropolitan area. “I say to surgeons, don’t throw away the books. There is a lot of joy in keeping the data and maybe even reporting on it.”

“One of my biggest passions is high school students. At Englewood, since 1996 we’ve had a shadow program, where 10 high school seniors come for a full day every week and rotate out to different areas and specialties. They are exposed to all aspects of how a hospital works—right down to how the instruments are sterilized. By the end of the school year, they have seen the entire hospital. Many of them go on to careers in healthcare. On other afternoons, two groups of eleventh graders get a chance to learn about science. They learn research, safety, and how to deal with scientific challenges. These  students have no idea what medical research is like. They might like it!”

Did you always want to be a doctor?

“Actually, I wanted to be a pianist. When I was told I had no talent I had to find something else. I went to college in the Bronx with a lot of other great students and got caught up in the competition. All of a sudden, I was in medical school! I didn’t want to be a surgeon, didn’t think I’d be a vascular surgeon. And I would do it all again! I tell the high school students we mentor, you may be ready to make up your mind, but be open to new possibilities. It’s so important.” 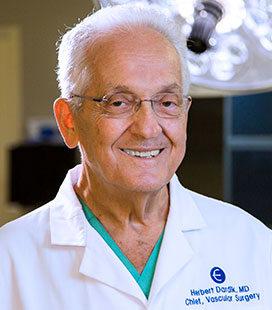