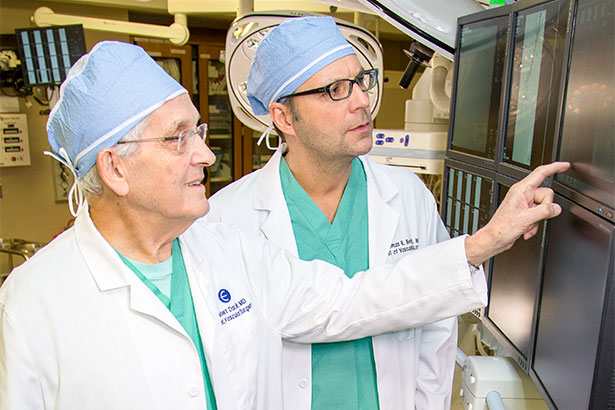 June 14, 2019 — For over four decades, Englewood has had a long and respected tradition of vascular training and excellence. The ACGME has now approved a two year vascular fellowship. Dr. Tom Bernik, Chief of Vascular Surgery since 2016, will serve as the program director.

The Englewood Vascular Surgical Service was created in 1976 after the hospital saw extraordinary growth in the number of limb salvage cases. This growth was the direct result of the introduction and FDA approval of the umbilical vein graft, which was invented by Englewood’s own Dr. Herbert Dardik. Prior to the development of this approach, amputation was often the only option for patients who required vascular reconstruction but lacked suitable veins, or in whom a prosthetic graft would likely fail.

Since that time, Englewood has maintained a regional, national, and international reputation in the vascular community and is well known as a respected training ground for vascular surgeons. The first Vascular Fellowship program at Englewood began on July 1, 1978 and continued for over 3 decades graduating 37 fellows under the Englewood program, and 10 fellows under the combined Englewood/Mt. Sinai program. Some of those fellowship graduates continue to be part of Englewood and have provided skilled and compassionate care to our community for years including:

In addition to these well respected clinicians, the fellowship program has also achieved academic prominence through awards, published manuscripts, and presentations based on clinical and laboratory research.   The successful Vascular Research Laboratory is a unique model of basic science and translational research in a community setting.  It has trained countless residents, pre-medical students, and high school students.

As the paradigm related to vascular surgery has dramatically changed over the years, Englewood has continued to evolve its clinical care models.  We have seen the development of the Aortic Center, Wound Care Center, and Vein Center and remained on the cutting edge of endovascular care delivery.   The recruitment of Dr. Bernik to his position as chief in 2016 has continued to drive that momentum.

The fellowship will launch next month.  It is thrilling that this fellowship will continue enhancing care for our community and contribute to the next generation of great vascular surgeons.